February 2010  –  Dickens Birthday event. Readings from ‘The Seventh Traveller,’ a collaborative multimedia project inspired by a short story by Dickens and a 3-hour one off live show of readings and music, both held at Dickens World.

March 2011  –  ‘Acts of mild rebellion’. A 2-hour show, with lecture, poetry recitals and a quiz, held in Simply Italian, a Rochester restaurant.
“The people I met were very friendly and engaging and I was impressed by all the work presented and enacted. You did well to fuse it together seamlessly.” “Thanks for a fab event, and the cupcakes were divine!” “An excellent evening.”

April 2011  –  ‘Alternative Royal Wedding’ open mic literary event held on Rochester Esplanade. A 3-hour picnic and open mic event to provide an antidote to the Royal Wedding. Readings from invited guests and open mic. Including a draw your own coat of arms competition.

October 2012 – ‘Short Encounters’. The live version of our Short Encounters podcasts.  An evening of stories, music and fun at the Dot Cafe in Rochester.

November 2012 – ‘Letters Home’ launch. An afternoon of readings and music in Rochester Library.

June 2013 – The WordShed at Fuse Festival. We were awarded a Spark Commission to take ‘possibly the world’s smallest writing retreat’ around the Medway towns and invited over 100 people of all ages in to sit awhile and write. ‘I heart WordShed.’  “We only came to Chatham today because the kids enjoyed the WordShed at Gillingham yesterday.” “It’s a wonderful idea, I will come back with the grandchildren tomorrow.”

July 2013 – ‘WordShed lite’ at The Rochester Literature Festival Garden Party. Visitors could come and sit on Charlie’s Chair and let the muse inspire them, as they made cut’n’paste poetry, added to the longest collaborative poem we’ve ever done, or play a random poetry/prose writing game.

“The Rochester Literature Festival are thrilled to have the outstanding ME4Writers on board once again, delivering a wonderful variety of activity across the Other Worlds, Other Voices festival. Their dedication, passion, commitment and enthusiasm make them a pleasure to work with and we look forward to doing so on many more occasions.” 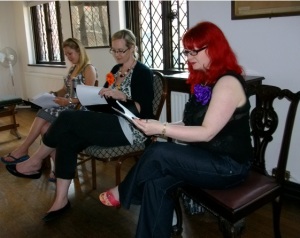 We wrote and performed two half hour shows for the Dickens Festivals in 2010 and 2011. In 2010, our show was ‘The Seventh Traveller’, readings from our collaborative project, based on a short story by Dickens. 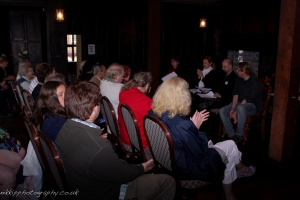 In 2011, our show was called ‘Low Expectations’ and told the untold stories of the minor characters in ‘Great Expectations’.

from the people formerly known as ME4Writers. Head over to www.wordsmithery.info for the most up-to-date stuff!

Very occasional bits of literary news, listings and opportunities for Medway and Kent. And of course, our events. http://eepurl.com/Z7QEH